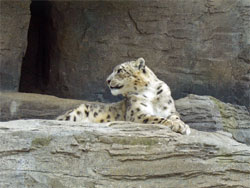 Because the snow leopard lives in such inaccessible places the size of the wild population is very difficult to estimate, but could be as low as 600. These are distributed over a vast area including parts of Mongolia, USSR, China, Bhutan, N. India, Pakistan, Nepal and Afghanistan. Numbers are few and are restricted to the higher colder regions above the forests, where permanent snow is found.

Seasonal migrations occur, descending from altitudes of over 4000m to around 2000m, where they spend the winter months. Snow leopards prey on mountain goats, ibex, gazelle, boar and smaller mammals and birds which they hunt at night and in the early morning. They retreat to rocky lairs during the day. Snow leopards are usually solitary but have been seen to hunt in pairs (This is usually a mother and cub). Unless they have cubs they do not stay long in an area. The cubs are born in May - June. They receive milk up to 4 months but will also take meat brought to the den after 1.5 - 2 months. The nest is abandoned after about 3 to 4 months, the young staying with the mother through the following winter. They reach their full size at 1½ years.

As demand for more land has increased, domestic stock have been brought into the remote mountain areas, once the sole domain of the snow leopard. Inevitably occasional stock are killed, with the result that the snow leopard is persecuted by farmers. Hunting for the fur trade has also taken its toll, as has the reduction in the populations of its main prey species due to habitat destruction.

The snow leopard's long furry tail helps it to survive in its cold rocky home. It is used for balance when the cat leaps from one ledge to another. The tail is also used as a 'nose warmer' when the snow leopard sleeps.

The first Snow Leopards came to Marwell in 1977 and we have been breeding them successfully ever since.

In the wild snow leopards will gorge themselves when prey is caught and may not have the chance to eat again until the next big kill. At Marwell they are fed a daily diet of beef (3 - 5kg joint), or occasional pork, lamb or rabbit. A vitamin and mineral supplement powder is sprinkled on the meat. During the winter they have 1 'starve' day a week, sometimes 2 in the summer to mimic their natural feeding pattern.