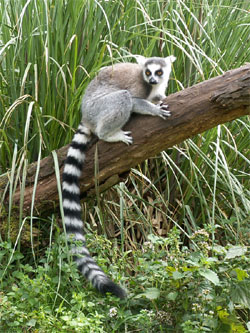 Ring-tailed Lemurs are diurnal animals (they are active during the day). They are found in thinly wooded, dry and rocky country as opposed to the thick forests where most other lemurs live. They also spend a considerable amount of their time on the ground - also unusual for lemurs, although they sleep in the canopy at night.

Ring-tailed lemurs are found in groups of up to 24 individuals. There is a well-defined dominance hierarchy within these groups, and females are dominant to males. Each group has its own home range, the size of which will depend on the amount and distribution of resources, such as food and water. The home ranges of different groups may overlap on the boundaries, but groups usually avoid each other.

They are mainly vegetarians, eating fruit, leaves and flowers, but have also been observed eating bark, sap and invertebrates. Exactly what they eat depends largely on the time of year.

Their long tails are a very important means of communication for Ring-tailed Lemurs. They help individuals to see each other when moving around on the ground, and can also be used to settle differences - a lemur waves its scent -covered tail in the direction of its rival. The smelliest lemur will win the argument, and this helps to prevent fighting and injury to either party. Using tails for balance when climbing and leaping is also important.

Numbers of Ring-tailed Lemurs are decreasing in the wild due mainly to destruction of their habitat. Fires are set to promote grass growth, areas are overgrazed by increasing numbers of livestock, and trees are cut down to make charcoal. The lemurs are also hunted with dogs in some areas, and individuals are also frequently kept as pets.

Ring-tailed Lemurs breed very well in captivity. They frequently have twins, and in some cases triplets. These babies initially cling to the mother's front, but after about two weeks can be seen holding on to the mother's back.