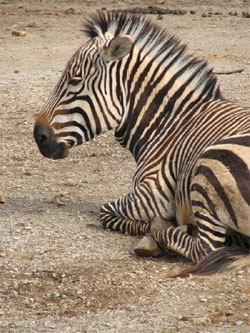 Hartman's Zebras have a similar social system to the Chapman's Zebra; one stallion with 1 - 6 mares with their foals. The mares tend to stay with the same herd all their lives whereas the herd stallion can be replaced by a younger one. They are not territorial, but use fixed home ranges which can vary in size during the year. One foal is born weighing about 30 kg after a gestation period of 12 - 13 months. The foals suckle for up to 12 months As well as the Hartman's Zebra, Marwell also has two other Zebra species, the Chapman's (Equus burchelli antiquorum) Grevy's (Equus grevyi) Zebra, both of which are vulnerable in the wild. A forth member of the Zebra species, quagga, has been extinct since 1875.

Striped horse-like animal. Smallest of the 3 zebra species. Hartman's zebras have a narrow black and white striped pattern that is in between the Grevy's and the Chapman's. The black stripes go all the way to the hooves, while the belly is always white. The mane is shorter than other species of zebra and there is a small dewlap on the throat.

Representatives of all 3 species are found at Marwell. We have the Grevy's zebra, Hartmann's mountain zebra and Chapman's zebra (a sub-species of common zebra). All 3 breed regularly. During the summer months they have access to separate grassy paddocks where they mix with other animals as they would in the wild. The Hartmann's mix with with the gemsbok.

Marwell Zoo holds the International Studbooks for the Grevy's and Hartmann's zebras and is thus an important member of the captive breeding programme.