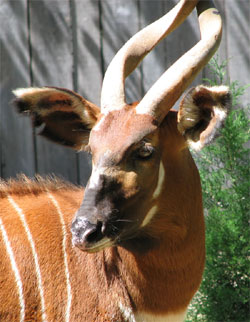 The bongo is the largest forest antelope. Its usual habitat is dense lowland forest; it is thought that the isolated Kenyan race is found on forested mountains up to altitudes of 3000m. It is active in the morning and afternoon, otherwise resting amongst thick undergrowth. The bongo is a browser, feeding on shoots, leaves and fruits, sometimes rearing on its hind legs to reach its food. It also uses its horns to unearth roots, including yams and cassava. Though solitary, bongo are also known to travel in pairs and in groups of up to 20 individuals.

A timid animal, the bongo has excellent hearing and is easily startled. It can run at surprising speed through seemingly impenetrable thickets, laying its horns low along its back to prevent them catching on vegetation. Perhaps as a result of its elusiveness, the bongo is the subject of local folklore which says it has magical powers and strange abilities. It is believed to be capable of hanging from branches by the horns, ready to drop on unsuspecting hunters! It is said to eat poisonous plants, so as to make its meat inedible to humans. Most marvellous of all, however, is the bongo's alleged tendency to dive underwater when pursued and remain there until the dry season, shedding its coat and feeding on fish!

In spite of the awe it inspires, the bongo is suffering from over hunting and from destruction of its habitat. The Kenyan population is particularly at risk.

Bright chestnut back and sides, with black belly. 11-12 vertical white stripes down each side. Large white crescent on chest. Erect mane from shoulders to rump and along tufted tail. Both sexes have horns that spiral in one complete twist.

The bongo's timid nature makes it difficult to observe in captivity, as it tends to hide behind obstacles in its enclosure.

Marwell's bongo are fed a pelleted diet especially for browsers, crushed oats, bran, fruit, and vegetables and browse when available.